DAILY OBJECTIVES:
_START DOING:
1. Work on my own.  As generous as 42 is for the people who are eager to help, I have realised that I need to spend more time working on my own. I realised that I need more Kate-video and Kate-Exercise thinking time before the Kate-peer tutoring time. And so this is what I’m going to try to do today.
2.Finish the D in one day. For today it’s the D03.  And I give myself an objective to get done with it before I leave the school today.
_KEEP ON DOING: 0 entries (the geeks for “no inspiration)
_STOP DOING: 0 entries (the geeks for “no inspiration)
#EVENING (22:44)
_OVERALL: following the 10 km last night I did need more sleep than usual, so today started with the alarm (as oppose to my usual waking up at 6h30 by myself). And due to this I didn’t feel productive in the morning. So at around 11 I did take a nap. This one was possible thank to one of the great persons who is a part of a not so numerous Lady’s camp )))
And so today’s special thanks goes to @Kara/krashid, who has kindly landed me her mattress. And this is a great transition to talking about of the biggest challenges the Piscine brings  – the daily schedule and the sleep (the second is a constant member of the hot topics list).
_WORKTIME: 15h
_TOPIC:
D03 – Language C – Pointers (I’m 2 days late on the program, those who aren’t have already dived in the D05. B as you can guess  I can’t really say much on this one for now).
As it seems to become an unfortunate trend for my part, every new subject puts the speed of moving forward down by one (sometimes 2). And what I found to work the best for me when I struggle with understanding a new subject is to find different ways it can be explained. Once Ive completed the collection I can then “compile” all the different elements and build up my own version that will fit with the neural architecture of my brain.
And so today I’ve found 10 new lucky victims of the “Explain to Kate” contest. And 10 seems to be my lucky number for any given subject. So if I do my math well for the rest of the days I would need 90 more people haha. Jokes apart, so far I find this set of tactics to be  best when it comes to understanding new notions:
– Ask
– Listen
– Draw
– Reformulate
– Repeat
– Practice
– Explain to others.
And looking back at the results, 5 days ago I really had a big problem getting the logic of C, and now I’m like a fish in the water with it. So it looks like it worked quite good so far.
_RESULTS:
Unlike other days, today I did actually stick to the morning objectives, and so the day 03 has advanced quite well and I did manage to finish 70% before leaving the school. The pointers notion seems to slowly sink in. Now the plan is to get in early tomorrow and to finish the remaining 30% by lunch, submit the D03 and move to the D04 directly after.
There will be one more thing in between the two which is Group project defence. And thus I should know the grade by the end of the day tomorrow.
RUSH00 – SUBMITTED (90% done, defense to be done – on 9/08)
SASTANTUA – 0% – NOT SUBMITTED
EXAM00 – 0% – FAILED TO LAUNCH.
D04 – NOT STARTED
D03 – IN PROGRESS (7/10 done)
D02 – 80% – 3xPASSED
D01 – 65% – 1xPASSED
D00 – 75% – 4xPASSED
WEIRD GREEN LINE (OVERALL PROGRES) – LEVEL 1 – 82%
_HIGHTLIGTS:
1.TWINS. The biggest highlight of the day – 42 never seize to surprise! And my big discovery of today was to meet the twins! And more so the way I did meet them.
I have scheduled the usual correction slot and the program did assign to me someone who I was supposed to correct on the Sastantua (the pyramid drawing programmed in C). Even though I haven’t submitted the one of my own, I was registered for it, so the computer considered it a good enough reason to give me a correctors role.
For starters, people who managed to submit the project go to the “hiding genius” category by default. So meet of the representatives of the geniuses squad –  @Alex/agaulet. To make sure you are all amazed and impressed – he didn’t have a programming background before the Piscine and he managed to finish it in 10h! (for the reference most people spend around 30h, and most of those who can get it done did have a solid programming background before). So here is the picture of the artist and the creation.
(P.S. as I discovered later, he had 0 on the project due to the classic 42’s – “forget to push” error… which is really a pity! Bocal, if you are reading this here is the proof he had it nailed!) 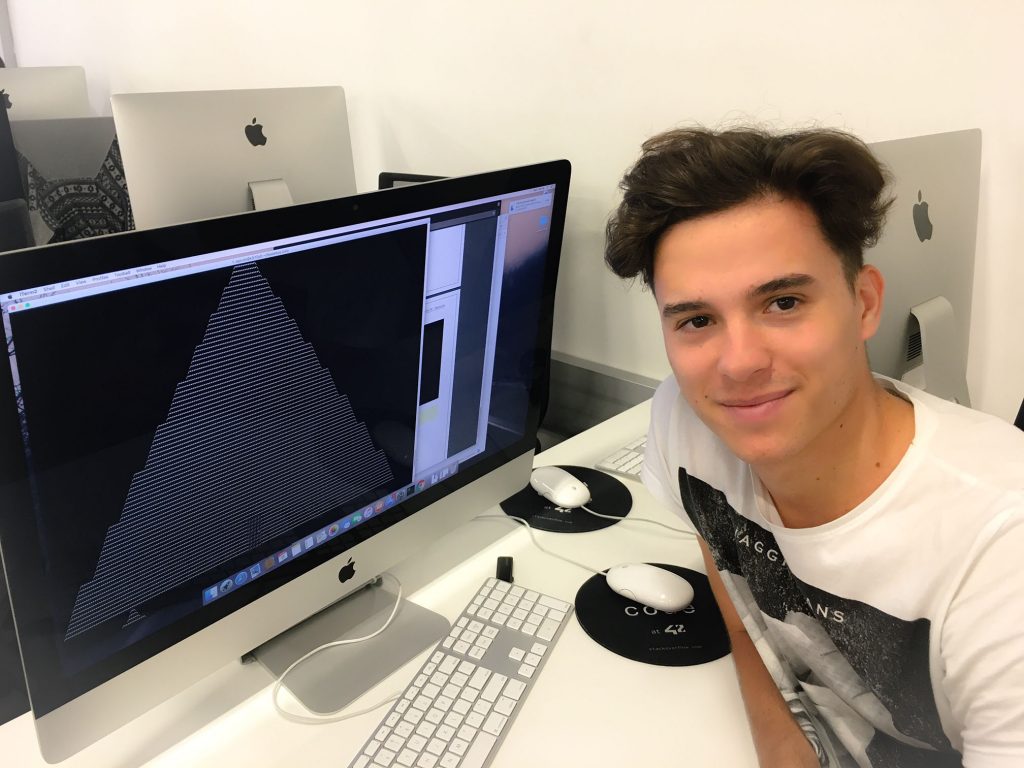 So 20 min later I’m back to my screen and the neighbour of mine has a corrector arriving. As he was passing by I thought that he looked familiar, and then I realised that it was Alex. So I said “Oh hey again,  Alex, funny coincidence”.
And the answer was: “I’m not Alex, I’m the second one.”
– “What do you men – the second one. There is two of you?”
– “Yes, we are twins”.
So 42 has it all, twins included )))) 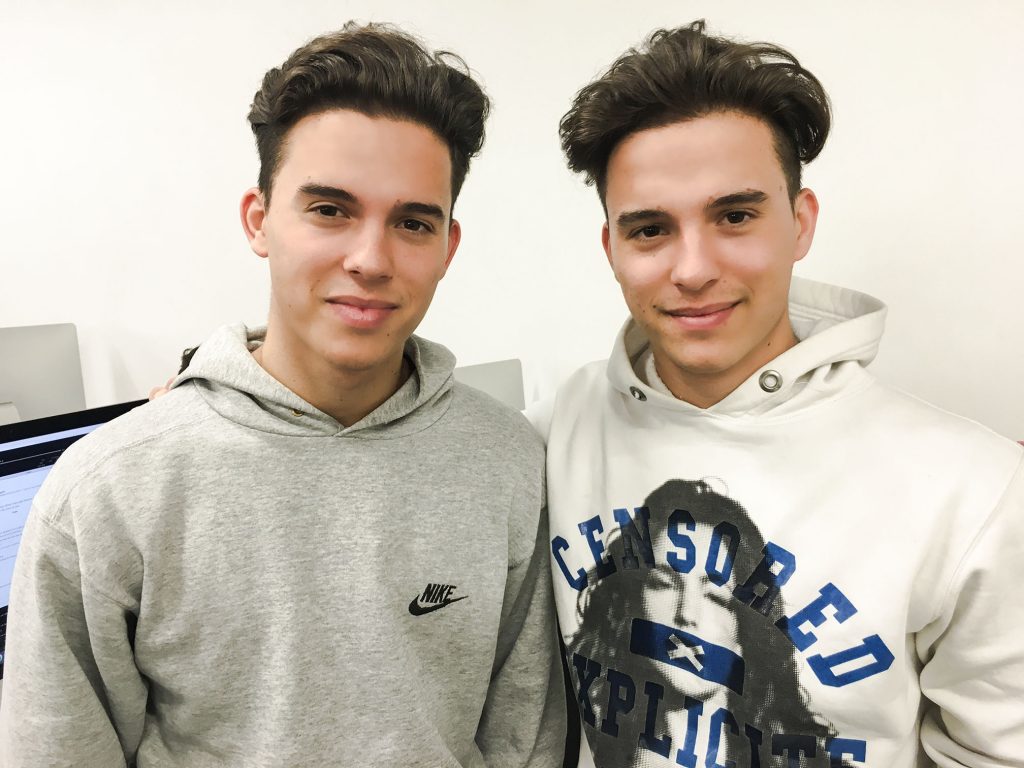 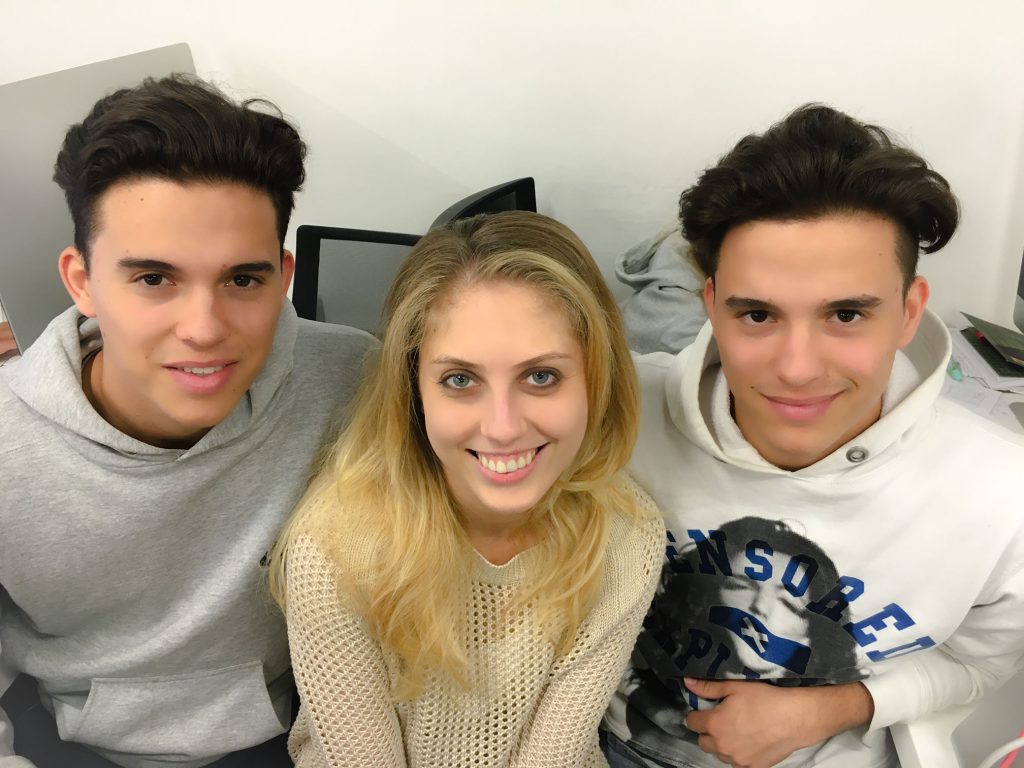 _CHALLENGES:
1.SCHEDULE _ 42RESIDENTS. I have raised the topic of schedule and sleep for quite a few times by now. For my part, I have decided long before the August 1st that the one of the main objectives I do set for myself for this month is to sustain the day-night schedule as close to normal as possible. Having assimilated plenty of books, videos and lectures on the topic of sport, health, brain and body mechanisms I have switched since quite a while to early nights-early mornings-healthy food and sports routines.
After having followed this routine for some time I felt the positive effects on the overall energy levels, productivity and happiness. So if there was one thing I was determined to absolutely stick to it was to keep these routines. Especially when the extra mile runs are a daily requirement, and the overall distance is long to go.
Even if I don’t manage to get it perfect (which means 8h of sleep) I do manage to keep the early mornings-food-sport parts. And so my day usually fits into 8-23h. One of the things that help with it is the fact that I’m not sleeping at 42. Which means I need to get back home at night and back to school every morning. And I’m quite happy with the overall result so far, even though it’s intense I do feel good (great even) and productive for the most of the day. There are still low energy peaks from time to time, but those can be easily managed by having a 20-min nap ( thanks to Kara’s help with the mattress),
And I can only imagine how this is different for the people who sleep at  42. I did talk to the girls who does and for the majority they say that they actually prefer this. Because they can sleep wherever and it saves the travel time. It worth mentioning that for girls it’s quite different, the room that is allocated for the ladies has a very dim light and is considerably well isolated from the external sounds.
For the rest of the population, however, it must be quite a challenge! You basically sleep in the middle of the huge room with lights on! and people all around you (and sorry for the details but they don’t necessarily take shower every day, some snore, and to top it up the staff gets very creative with the pranks (like airing the porn at 3 a.m. on the microphones).
And the comfort aspect apart, the sleeping hours itself are totally random… As there is no pressure of getting to the school and then going back home, the time is not perceived the same way. And so I found people asleep on their chairs when I come in to start the day, some with the zombie eyes and others with the day-night time swapped all together…
Judging from the outside (I mean as a person who does not sleep at 42) I’m not sure it’s the best approach but everyone is its own boss. One thing I can say for sure is that it’s possible to keep on with the standard schedule and move forward with the program. And I think that in the long run the batteries go longer and the processor works better if you pace yourself.  In the end, the equation of productivity gives out the same result (20h in peanut-butter-brain state or 12h of Rubik’s-cube-is-my-bff state), when the equation of overall health, happiness and appreciation of the process is definitely probably higher on the normal schedule part of the scales.
But I guess we will see which strategy is better in 20 days. And with this, I will have to leave you to get my good night sleep and try to get in early tomorrow morning. My next screen neighbour (@Gabriel) set a new “early bird”  challenge – he now gets in by 6.30 a.m.! I’m not going to get that ambitious but I will definitely try to do 7.30 tomorrow.
_SPECIAL COMMENTS: 0 entries (system maintenance, check again later/the geeks for “no inspiration”)
#PEOPLE
@Kara/krashid (reference OVERALL)
@Alex/agaulet & @Marvin/mgaulet r (reference HIGHLIGHTS)
@group of students who did count among the 10 persons of “Explain to Kate” challenge (and whom I forgot to ask the names)
@Gabriel – reference CHALLENGES)
@Maxime & @Thomas who contribute significantly to keeping my daily minimum of required laugh time on the top limit 😃 (I will tell more about these 2 in later articles, Thomas will get an editor’s special! You will understand why, once it’s out)
No comments yet