Actual meanings of various terms:
TEAM WORK: Having somebody else you can blame it on.
HARDWARE: The part of a computer you can kick when there are software problems.
IMPATIENT: Somebody who is waiting in a hurry.

#MORNINFG (6:32)
This morning was an early one again. I did plan to sleep it in 5we are Sunday after all) so the alarm was set for 7h30 (yes, I did say spell in – the meaning of this one was temporary altered on the August first )) So Ferrari objective might as well be achieved after all :).
And as it’s Sunday I decided I would do something different this morning, and the lucky pick was a de-boxing and assembling of my Ikea delivery (oh, c’mmon, everyone has its peculiarities). And so today I’m writing from my new perfect breakfast chair (yes, be jealous b…es haha).
DAILY OBJECTIVES:
_START DOING:
1.Running. It will not be exactly the START, but more of a START again. The 15 hours in front of the screen do not do good to my back.. And even yoga doesn’t help as much as it usually does, so I will try to get out earlier today and go for a run.
_KEEP ON DOING:
1.Assembling the furniture in the morning (as there are still 1 table, 2-floor shelves and flowers support to go). And you see I don’t talk about sleep anymore (not sure how long will that one last haha).
_STOP DOING: 0 entries (the geeks for “no inspiration)
And my inspiration seems to keep on with the usual working schedule – 5/7, so I really don’t know what more to say. But will sure get some by the evening.
#EVENING (21:30)
_OVERALL:
The day was quite calm. As we have finished the group project by the end of Saturday, each of our group members continued with their daily tasks.
For my part I did manage to submit and validate the D02 (hallelujah!). It took me 2 days of brain freeze and 10 persons trying to debug it. But then I did finally managed. I will get more into details on this one in the Challenges section.
And today I felt a crucial urge to go for a run so my day was short (in the 42’s reference “I took my afternoon” haha) and I left at 21, and went for a 10k run! I did miss it!
_WORKTIME: 11h
_TOPIC:
RUSH00
One of the 3 members of my group (@Gaetan/gavizet) rejected to take photos of the group because, as it turned out, literally hates being photographed (when I was doing my paparazzi yesterday he mentioned that he didn’t like it, but I thought its the fake modesty. And it seems I was wrong. I mean, if there was a social mouvement of anti-selfiers, he would be a president. Because if my negotiations skills didn’t do it, it means there is nothing that can. I even tried the ultimate solution – a bag of chocolates in exchange – didn’t work either. So I gave up.
So I know nervously wait for the moment when my phone will get hacked (so that Gaetan can delete the pictures of him stored there) and the website taken down (for the same reason) haha. But considering how much he is motivated to succeed the Piscine selection this year (which is a second way around) I assume those two won’t happen any time before September. 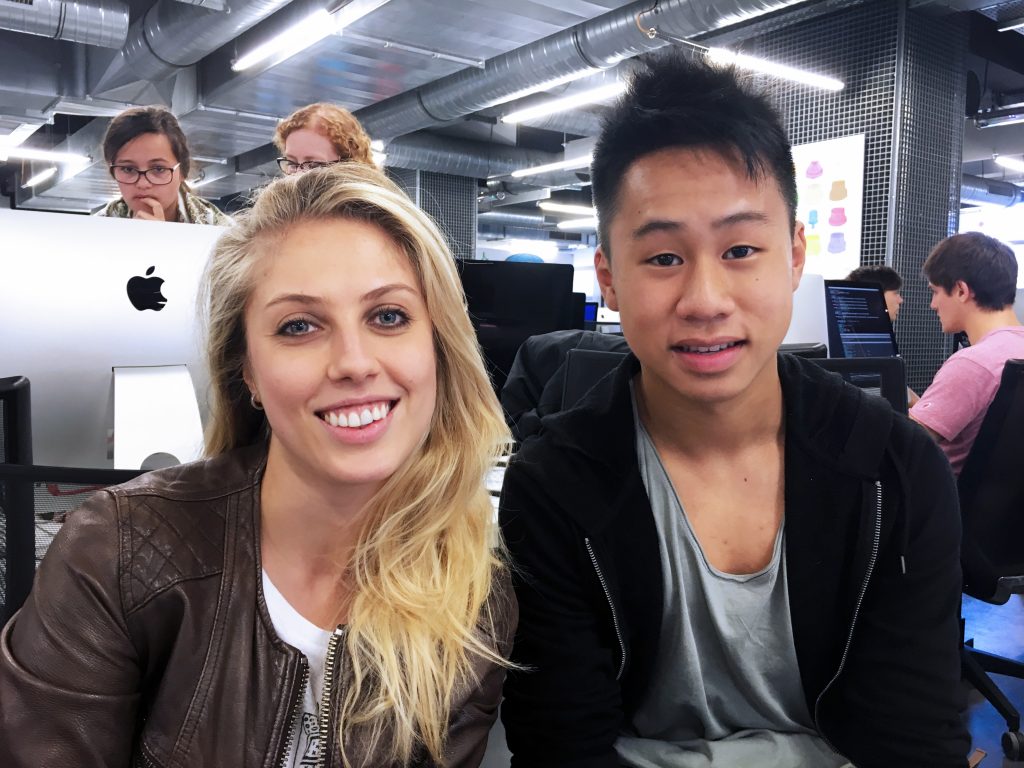 😉 Otherwise, results of the project are tomorrow, I will keep you posted.
And my photo obsession apart, I really enjoyed working with my group! Hope the randomising algorithm for my future RUSHes will do as great of a job as this time! 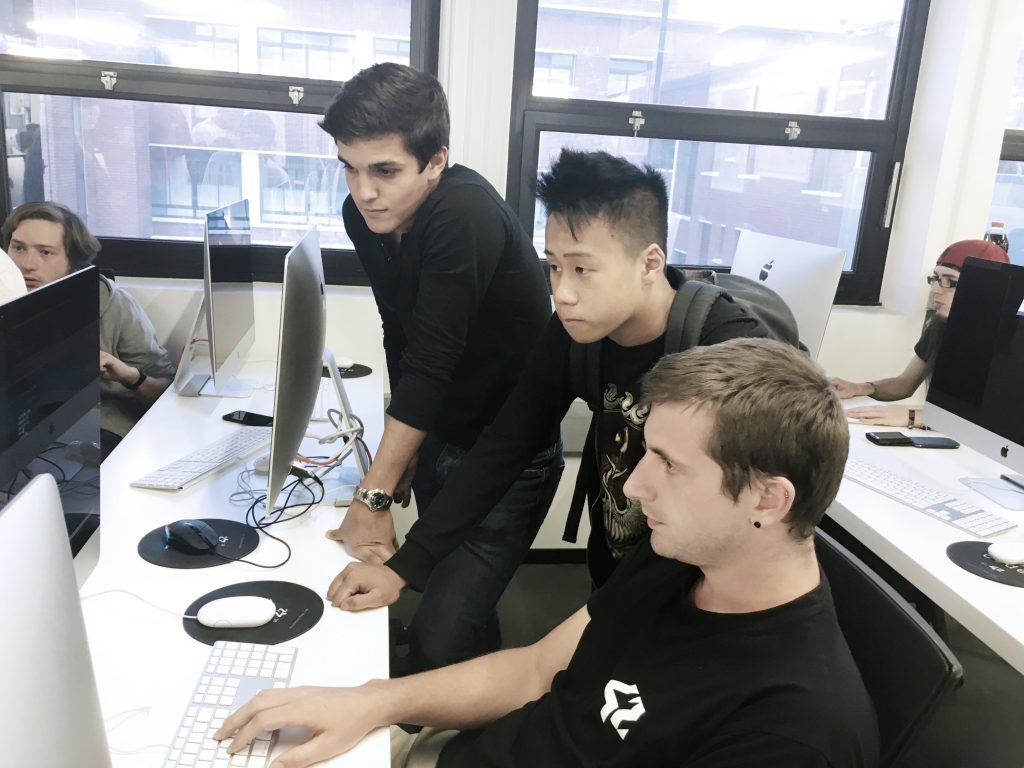 _RESULTS:
DAY02
And as I was “very attentive” I had to make 3 submits to validate my D02. For the first one I submitted and then realised that I have send the wrong file for the ex02. And thus I made my first use of the give up button! The second time around I did correct the initial mistake but created a new one – a good old typo – in the function name. So 2 corrections later I have pushed it for the 3rd time (which is known to be a charm), and the final result is 80%.
In the spirit of concentrating on positive, one of the correctors did explain me a new topic that will be definitely useful for the next exercise and so there is a new name in my list of Peer-Profs (@Laurent/Lawerly). And it turns out that the day he was working on was directly related to my math background so I did manage to return the favor and helped him with the notion of prime numbers.
And one more of the correctors I had today did show me the ingenious solution that one of the Swimmers did create the piece of code that allows to verify all the elements of the submitted exercises before hand (and he did it next to the execs he does during the Piscine… so he goes directly to the category “hiding genius” @Jack/Jharold)
As for the a bit less positive – corrections take time! And they also take points that you have to earn back by doing corrections yourself. And doing corrections also takes time! SO the bottom line I did spend half of the day on corrections.. And tomorrow is full in on the exercises.
RUSH00 – SUBMITTED (90% done, defense to be done – on 9/08)
SASTANTUA – 0% – NOT SUBMITTED
EXAM00 – 0% – FAILED TO LAUNCH.
D04 – NOT STARTED
D03 – NOT STARTED
D02 – 80% – 3xPASSED
D01 – 65% – 1xPASSED
D00 – 75% – 4xPASSED
WEIRD GREEN LINE (OVERALL PROGRES) – LEVEL 1 – 82%
_HIGHTLIGTS: 0 entries (the geeks’ for “no inspiration”)
_CHALLENGES:
1. BRAIN FREEZE. As I have briefly explained before my first day of C started with a big traffic jam on the Brain highway. I did manage to do the first 4 exercises in an hour or so and then I got to the famous ex04 that took me (attention!) 2 days on and off. And the weird part is – i had no problem to get the other ones that were super close in the logic and algorithm but this one still didn’t sink in… The problem wasn’t even the solution itself because the task on its own is not complicated, what I had trouble with was… Two things in fact. First my 5 years of math school finally saw an opportunity to jump in and the part of my brain storing those was overexcited hahha So wanted to find a super optimized arithmetic solution but I needed a second brain to help me get there. The problem was I was the alone in this path, all the other people took the other solution, that was more obvious and a bit more long. So I did stuck with myself and when I still got nowhere after 1 whole day of trying I figured I need to take  a more traditional path and just move forward. And here came the second difficulty – as I have started on the different logic I had a big trouble switching to the loop-in-loop solution… When I did get to the point that the program worked (even though I found it too obvious and too long, I just moved on! Sometimes it’s just this specific task that you just don’t get! So 80/20 approach, and moving on!!
_SPECIAL COMMENTS: 0 entries (system maintenance, check again later/the geeks for “no inspiration”)
#PEOPLE
@Jack – hiding genius (refer to the RESULTS)
@Laurent – yet another great member on the list of top “peer-profs”.
And my lovely trynome (on the pictures it’s rather a binome, but you like puzzles, right ? So pics of day05+pics day06 and the have it in ful) that we are still have to pass the project defence with on Tuesday.
Comment (1)